When to Hire a Workers Comp Lawyer

You can decide for yourself if it’s time to hire a workers comp lawyer by reading the examples below. Or, you can ask an attorney for their expert opinion with a free consultation.

Imagine you are at work and have to move a stack of boxes. Halfway through lifting one, your boss shoots you with a bow and arrow.

He doesn’t really, but pain shooting through your shoulder and neck makes you think he did.

Whether it turns out to be a pulled muscle or a slipped disc, you’re going to need medical help. That means you’re about to enter the workers compensation maze.

Who you gonna call?

The first call some people make is to a workers comp lawyer. That’s a great idea, except when it’s not.

Allow us to explain the difference and help you decide when to lawyer up.

Signs You Should Get a Workers Comp Lawyer

How your company, or more importantly, its insurance carrier, handles your case will determine whether it’s in your best interest to get a lawyer. Here are 10 signs you need a workers comp attorney on your case.

Think you need an attorney?

A free consultation will help determine if you need a workers compensation lawyer.

Signs You Should Not Get a Workers Comp Lawyer

Should I Get a Lawyer for Workers Comp? 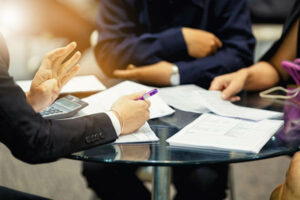 Hiring a lawyer for a workers comp claim is a question every injured worker faces and the truth is that most situations – injured ankle, cut on the arm, sore back – are easily treated and won’t require more than a bag of ice, a trip to the doctor, a few aspirin and some rest.

However, if your work injury is serious and things get contentious between you and your employer or the insurance carrier handling the case, there is no question that it’s in your best interests to at least talk to a workers comp lawyer. A twisted knee or strained back can turn into knee or back surgery and things get serious very quickly.

“You don’t have to hire an attorney every time you have a claim,” said Tom Holder, a prominent workers comp lawyer in Atlanta, “but you should at least call one and let them explain how the process works and what benefits you are entitled to receive.”

Just don’t automatically assume your case is going to turn into a legal food fight.

“Too many claimants get a lawyer the day after the accident,” said Jeff Branham, a workers compensation attorney in Florida.

Conversely, if you’re worried about rocking the boat at work or the expense of hiring a lawyer, not calling one could end up costing you a lot more.

“The perception of the public is that I can’t afford a lawyer, or it’s going to cause unnecessary delays or the lawyer is going to take too much of my award,” said Judge Neal Pitts, a Judge of Compensation Claims in Florida. “If the case settles for $100,000 with a lawyer or $10,000 without, that’s a no-brainer. And that happens.”

Handling a Case on Your Own

We’ve mentioned SSDI and IME, but do terms like AOE/CEO, cumulative trauma, DEU, IIPP, PDRS and WCAB mean anything to you?

Unless you’re an attorney or enjoy reading workers compensation manuals in your spare time, probably not. Handling a case on your own is usually a bad idea, especially since the insurance company will be represented by someone who’s probably handled hundreds of cases.

Even when employees win their appeals, most would have done better with a lawyer arguing their case.

When You Should Get a Lawyer for Workers Compensation

As soon as you decide to contest the settlement decision.

At that point, workers compensation can quickly turn into a legal jungle of paperwork, deadlines, depositions and evidence gathering. It’s easy to get lost if you don’t know what you’re doing.

What an Attorney Will Do for You

There will be court proceedings before your case is heard by a workers comp judge. A lawyer will file the paperwork on time, build your case, negotiate with the insurance company and draft a settlement, if one is agreed on.

If it’s not, you’re headed for a hearing. It’s High Noon, and everything will depend on how effective your side makes its case.

An attorney not only will prepare your argument, he or she will prepare you to say the right things in testimony. They also will cross-examine the insurance company’s witnesses. That job should not be left up to amateurs.

Unlike civil cases, workers compensation law has a safety net of sort. When an employee represents himself or herself, the settlement is not final until the judge approves it.

They can reject the settlement if they feel it’s not reasonable and the employee is getting a raw deal. But the settlement usually has to be grossly unfair for a judge to reject it.

To avoid that predicament, get a lawyer at the first sign of trouble. You’ve already been injured on the job. You don’t need what follows to turn into a pain in the neck.