What Is Workers Compensation? 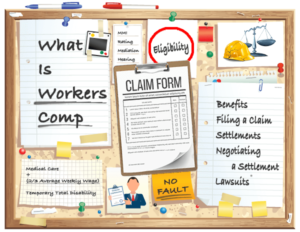 Workers compensation, sometimes called workmans comp, is an insurance program that provides medical and financial benefits to employees injured in a work-related accident or illness.

The program protects the employer from being sued, while also ensuring that injured employees have access to necessary medical treatment, regardless of cost, and are compensated for wages lost during rehabilitation.

Workmans comp also provides payments to an employee’s beneficiaries if the employee dies because of a work-related accident or illness.

Workers compensation is a “no-fault” program, meaning workers are entitled to benefits regardless of who caused the injury, as long as it was work-related.

It is important to note there are situations when an employee must prove that injury or illness was sustained at work.

Workers compensation coverage is mandated in every state except Texas. The laws governing workers comp are enacted at the state legislature level and enforced by state agencies. Because of that, it is safe to say that many aspects of workers compensation – specifically, levels of benefits and ways in which those benefits are delivered – vary widely from state-to-state.

The history of workers compensation in the United States dates back to the early 1900s and was modeled after programs created in Germany and England. At the time, workers trying to recover medical expenses and lost wages had to sue their employer and prove negligence. The result was long, costly legal cases that often-favored employers over employees.

The workers comp process starts with filing a workers comp claim. Typically, all you have to do is notify your employer and they, along with the insurance company, will handle the claim. If there is a dispute, you can contact the workers compensation board in your state, or enlist the services of an experienced lawyer.

Workers comp will cover all medical bills related to the injury as well as providing two-thirds of the injured worker’s average weekly wage while they are recovering.

How to File a Claim

Step 1: Report the injury to your employer

This is common sense. Tell the people you work for what happened as soon as possible. They need to document the circumstances so you can receive benefits.

More paperwork. Your employer should have the official form, but if not, doctor’s offices and emergency rooms have them.

Step 3: Deal with the insurer

The paperwork ends up on the desk of an insurance adjuster who either approves or denies the claim.

What Happens If a Claim Is Denied?

This is where workmans comp gets a little messy. If you don’t have a workers comp lawyer by now, you probably want to look into hiring one.

Either way, your chances of succeeding increase dramatically with a competent lawyer representing you.

What Benefits Will You Receive?

If the employee is permanently disabled by a work-accident and can’t return to work, the program will pay benefits for medical care and lost wages.

It also should cover ongoing medical expenses if the injury or illness requires several weeks, months or years of rehabilitation.

Workers compensation can also cover funeral costs if the worker dies because of a work-related accident.

The owners of a company can opt out of workers compensation insurance (and often do), but employees must be covered. The question about workers comp eligibility is: What exactly is the definition of employee and who exactly was he working for?

This discussion often comes up in situations where general contractors hire sub-contractors and the sub-contractors turn around and hire employees, and a few day-labor workers wander on to the job site and … well, you can see how this becomes an issue if there is an accident.

The IRS has a lengthy discourse on what defines an employee but not even their discussion comes to any specific conclusion. The IRS suggests weighing “common law rules” for behavior, financial renumeration and type of relationship.

In simple terms, an employee is anyone performs services for you in which you control what is done, how it will be done and how he will be compensated.

Most states, however, operate on a 1-2 year deadline after the injury occurs.

How Do Settlements Work?

This is the place where all sides involved – the employee, employer and insurance company – want to reach and reach quickly.

A workers compensation settlement happens when the employee and insurance company agree on what benefits and compensation there will be, both medical and financial, to close the case for good.

Insurance companies want to get this over quickly so as soon as a doctor declares that an employee has reached Maximum Medical Improvement (MMI), the insurer probably will offer to settle the claim.

There is no set formula for compensation and many factors to consider before an agreement can be reached, which is why negotiating a settlement is a big part of workers compensation cases.

Insurance companies have been involved in enough of these to know what an injury is going to cost them and what they will need to justify giving any more than that.

It would be unusual, on the other hand for a worker to have any experience in calculating what it will cost to get healthy again and how much the injury is going to affect their wage-earning potential.

That makes this is another really good time to consider hiring a lawyer, if you don’t already have one.

If the two sides negotiating a settlement can’t reach an agreement, the case will be assigned to a mediator to resolve the differences.

The mediator is a neutral party appointed by the court to push both sides to an agreement. The two sides might agree to have their case resolved by a private mediator in order to speed up the process.

Close to 99% of workers compensation disputes are settled by mediation, meaning only 1% end up going in front of a judge.

That speaks well to the mediation process and the fact that the participants on both sides of workers comp issues want the matter settled as quickly and fairly as possible.

The problems come when a workers compensation claim is denied. It doesn’t happen often, but when it does, the dispute usually is over whether the accident occurred at the workplace or whether the worker should be considered an employee.

Once all matters are resolved, the agreement is sent to a judge for final approval.

Can You File a Lawsuit?

Injury lawsuits come into the language when the injured worker decides to go after the employer for negligence. When that happens, the worker forfeits the medical care and lost wages due him through workers compensation.

The case now becomes a “personal injury lawsuit” and the burden of proof is on the worker to prove his employer was negligent.

Personal injury is the most common form of lawsuit stemming from a workplace accident, but there also could be lawsuits for retaliatory discharge (worker fired for filing for workers comp); a third-party lawsuit (against someone who is not your employer); product liability suit (malfunctioning equipment or machinery); and toxic tort (exposure to harmful substance like asbestos).

The process of filing a lawsuit based on a workplace accident is no different that filing one for an accident in your front yard: write up a complaint and file it at the state court nearest you.

Be aware of the statute of limitation laws in your state to be sure you file your case on time. You will have between one and six years to file the suit, depending on what state you live in.

Is a Lawyer Necessary?

It is wise to have legal representation when you suffer an injury, whether you choose to accept workers compensation or roll the dice and try to prove negligence on the part of the employer.

It is always possible to represent yourself, but it’s also foolish. Workers compensation law varies so dramatically from state-to-state and year-to-year that it is almost a guarantee you will need a lawyer to file your suit and take the steps necessary to win a judgment for yourself.