The law, dubbed AB 5 and signed by California Governor Gavin Newsom on Sept. 18, will qualify over half a million drivers at the ride-sharing companies for workers compensation benefits, according to the bill’s sponsor, Assemblywoman Lorena Gonzalez D-San Diego.

Those are staggering numbers for two companies already drowning in debt. Uber is expected to lose more than $4 billion in 2019 and Lyft’s losses for this year are estimated at over $1 billion. The law goes into effect Jan. 1, 2020, but any new workers’ compensation obligations for employers under AB 5 aren’t effective until July 1, 2020.

Several classes of jobs – doctors, accountants, architects, real estate agents, travel agents, graphic designers and investment advisers, to name just a few – have been exempted from this law, but not Lyft and Uber.

“This is not going to work for either side,” said Margaret Spence, CEO of nationally-recognized risk management and workers compensation firm C. Douglas & Associates. “The state is singling out a particular category of people – workers in the gig economy – and penalizing companies for hiring them.

“The gig economy is for entrepreneurs. The people protesting the lack of benefits don’t want to be entrepreneurs, they want to be employees. If that’s the case, then go look for a job where you get the benefits you want. This is not the job for you.”

Their status changed when AB 5, championed by Assemblywoman Gonzalez, sailed through the legislative process without much opposition. 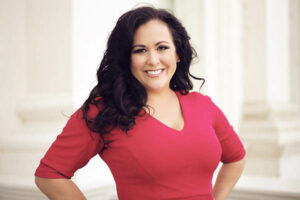 “In California, employers are required to provide their employees with workers compensation benefits, regardless of the number of hours worked per week by the employee,” Assemblywoman Gonzalez said in an e-mail exchange with WorkersCompensationExperts.org. “This is already the existing law and AB 5 does not change that fact.”

The blows to their bottom line are not the only problems with workers compensation that the new law creates in California. Uber, Lyft and the other businesses affected by AB 5 will have to start managing workers compensation claims, which could be a huge problem given the nature of their business is driving on the most congested roads in the U.S.

Uber and Lyft will have to re-set their business model and add a layer of management to their HR departments that can:

Another potential thorny situation is the ride-share company’s financial responsibility for lost wages claims when an employee has a full-time position with another employer and works only part-time for Uber or Lyft.

If an injury occurs while driving for Lyft or Uber – and prevents the employee from working at both companies – it’s the ride-share company’s responsibility to pay for lost wages for both jobs, according to California’s Division of Workers Compensation.

The big hit, however, is going to come when it’s time to pay premiums for workers compensation insurance.

Insurance carriers use a math formula that involves the number of employees, their monthly wages and a carrier rate that varies for specific jobs. Drivers, for example, have a much higher carrier rate than clerical office workers because the risk of injury is much higher.

The California Workers Compensation Rating Bureau said that Uber and Lyft drivers would not fit in a special category reserved for taxis, but rather in the category alongside bus, shuttle, van and limo drivers as non-emergency ride providers.

The median rate for that category of employee is $15.41 and that was the rate used to calculate the impact to $721 million impact on Lyft and $444 million hit to Uber.

The low-end rate for that category is $7.10 and the high-end $24.83. At the low end, that would still put Lyft at $332 million and Uber at $204 million. The high-end would be a crippling $1.2 billion price tag for Lyft and equally damaging $716 million impact on Uber. Regardless of what rate is quoted to Lyft and Uber, the result is going to be a huge number.

Uber says it is a technology platform for different types of digital marketplaces, thus the provisions of the law don’t apply to its drivers. Lyft has joined Uber and DoorDash, a food delivery service, in a $90 million campaign to change the law.

Other companies in the workers compensation industry are watching what happens in California. Recent history suggests the law could easily drift across the country to other states. 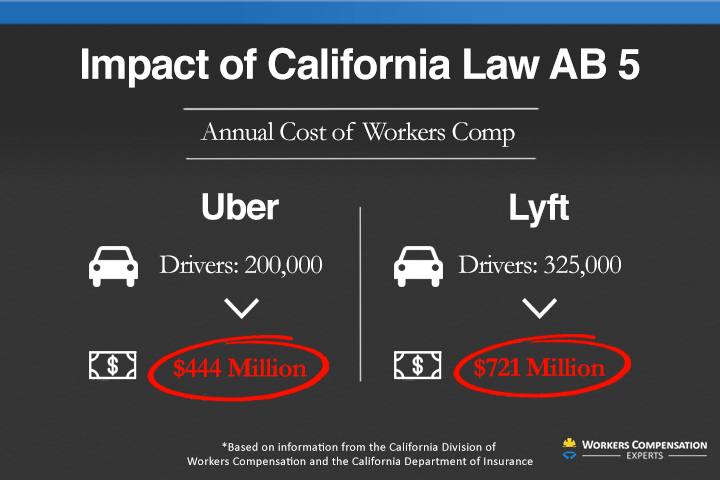