What Happens During Workers Comp Mediation? 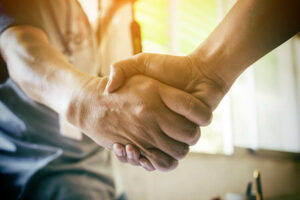 There are more than three million workplace accidents a year in the United States with at least that many versions of what happened and how badly an employee got hurt.

That’s one of the millions of good reasons mediation has become the dominant player in the workers compensation claims process. Most states compel the two sides to go through mediation and there is a very good reason for that: It’s easier to let an outside party, who has no vested interest in the outcome, sort through the various versions of the story and find the common ground that can lead to a workers compensation settlement.

Mediators are usually former or current workers comp lawyers or judges. They know the stress and unpredictability of taking a case to trial. They know their role is to be an impartial go-between who convince both sides to agree on what happened and what it is worth.

Though reliable statistics are hard to verify, claimants, lawyers and judges who’ve been through the process all agree that mediation is a successful route to a settlement in 80% or more workers comp cases.

Another survey suggests that it could cost four times as much money to litigate – take your case before a judge – as to mediate.

Here’s how and why mediation is the fastest, and probably fairest way to settle workers comp disputes.

Mediation is a process for resolving workers compensation disputes, using a neutral third-party negotiator to assist in reaching a settlement.

The key word in that sentence is “neutral,” meaning not supporting either side in a controversy.  Mediators don’t choose sides. They are merely a go-between in the disagreement.

“My role is not be a judge,” said Mike Maida, a mediator from Tallahassee, FL, with 25 years of experience. “I’m not sitting there as an arbitrator and I’m not making a decision as to whether the case settles.

“I’m working with the parties to see if I can get both sides to the point where they can make a decision on a settlement.”

Maida then added a qualifier that anyone involved in mediation should remember:

“Mediation is designed to be non-adversarial. Sometimes it is … and sometimes it is not. It is up to the two parties to decide if they really want a resolution to their differences.”

In other words, don’t expect to get everything you asked for. Learn to compromise. Let both sides feel like they got a win.

The participants in mediation and the roles they play are not surprising with one possible exception: the employer isn’t required to be there, unless he/she self-insures their company.

The people who do have to be at mediation and the roles they play:

The employer can attend, but they don’t have to be there. They don’t really have a financial stake in the outcome. They bought workers comp insurance to take care of that for them. It’s the insurance carrier who will pay whatever comes out of the mediation.

Do You Need a Lawyer for Mediation?

The legal answer is: No, you do not need a lawyer at mediation.

The practical answer is: Get a lawyer!

Workers compensation law has quirks and precedents and standards and case history – like every form of law – that only someone in the business would be able to keep up with. An experienced workers compensation lawyer has seen many, probably hundreds, of cases like yours. He or she should know the value of the case and how to get that from the insurance carrier.

You certainly can research that information and possibly cover all the angles so you’re ready for arbitration, but it likely would take too much time and cost too much money to be worthwhile.

Think of it like a decision to re-wire your house. Rather than hiring an experienced electrician, you could buy all the right tools and equipment and then watch enough youtube videos to get it right … or you could miss an important step and watch your house burn down.

It’s up to you and how confident you are in your understanding of the law; ability to research pertinent facts; know the limits of compensation and have the skill to negotiate a fair deal.

No Second Chances in Mediation

The first thing to understand about mediation is that both sides win – case is settled – or both sides lose – case is not settled.

That will not be the case if the situation goes before a judge. There is one winner and one loser … and plenty of stress for both sides.

You don’t get “do-overs” or “second chances” to mediate. You can still settle without having to go to court, or even while the case is being decided by the judge, but you won’t have the benefit of a mediator working with you.

If a settlement is reached in mediation, it is outlined and the actual papers are drawn up later. If it’s not settled, the mediation game is over and things go to a judge.

How to Prepare for Mediation

Mediation involves opposing sides, but it is not a trial. It’s not supposed to be adversarial. There is no judge to make rules or decide who’s right or wrong.

But you’re still trying to convince someone – in this case the people representing the other side – that you have the stronger case and it would best to settle, rather than take a chance of things going wrong at a trial.

That means being prepared as if you were going on trial. Know the facts of your case. Know the strengths and weaknesses of your arguments and be prepared to respond if questioned about them. Have medical receipts, doctor’s records, evidence supporting claims for benefits, etc. in your hands to help the mediator determine the strength of your argument.

That can be done yourself, but realistically, you need an attorney to help gather information, examine documents and evidence and evaluate accurately what your case is worth. Attorneys are familiar with the “discovery process” which means gathering evidence, questioning witnesses, finding out what evidence the insurance carrier may have and organizing all of that in a manner that is easy to follow.

If you aren’t confident you can do all that, hire an attorney.

Questions a Mediator Will Ask

Mediators are not judges and they have no authority to make rulings during a mediation process, but it is impossible to hear two sides of an argument and not think one side has more to it than the other.

That’s why the mediators ask these questions:

The answer can’t be: What do you think my case is worth? It doesn’t matter what the mediator thinks it’s worth – and he’s not going to tell you anyway! The only thing that matters is what you think it’s worth.

What Happens in Mediation?

That is important. If the case isn’t settled in mediation, you can’t turn around at trial and use what happened in mediation as part of your argument in front of the judge.

This is a voluntary proceeding. The claimant does not have to answer questions or agree to a settlement if they don’t want to.

So what actually happens?

The two sides meet in one conference room. The mediator introduces himself/herself and describes how the process works. They remind everyone that the facts exchanged are confidential and everyone here is trying to resolve problems and reach a settlement.

The mediator then turns the floor over to a spokesperson for each side, usually an attorney, who highlights key points of the case and outlines the strengths of their side of the argument.

Next, the mediator sends each side to separate rooms and starts shuttling back-and-forth between the two sides, relaying updated information and proposed solutions for the dispute.  The mediator might also make you aware of the strengths and weaknesses of your argument in an effort to get the matter resolved.

At some point, one side will make an offer to settle. Predictably, the other side will make a counter-offer and the mediator will continue shuttling between the two rooms, trying to get the two sides to agree on a number.

Be aware that if an agreement is reached at mediation, it is binding. You can’t have “buyers remorse” a week later and try to go back on the agreement. If you reach a settlement at mediation, you have settled the case for good.

Should I Go to Mediation for Workers Comp Case?

There are two excellent reasons to mediate a workers compensation case: Time and money!

Mediation usually resolves a case in a matter of hours, while taking the case to court could mean months, possibly even years to reach a resolution. That’s more time paying a lawyer, which may affect the amount you receive in your settlement.

And if the case drags its way through court, it means all parties involved – claimant, co-workers, managers, doctors, claims adjusters – must re-tell their side of the story accurately and that can be a dangerous thing.

Try getting five people to tell the same story twice and you’ll see how this can go wrong.

But what it ultimately comes down to is this: What does the claimant want from the case? What will it take to make him/her satisfied?

Maida, who said he’s mediated thousands of workers comp claims, had a very telling story on how easy – and difficult – it can be to settle a case.

“Virtually identical offers are made, and one claimant regards the offer as manna from heaven … but the other guy sees it as a uniquely insulting. How is that possible? I don’t know.”

What it means is everyone’s expectations are different. It helps to be realistic and willing to compromise. Those two characteristics will make mediation work effectively for all sides.