Workers compensation is designed to get employees swift medical and financial attention for job-related injuries or illnesses while keeping employee and employer from wrangling — expensively — in court.

To receive benefits, the employee must meet five requirements:

1. The injured worker must be classified as an employee

2. The employer must have workers compensation insurance

3. The injury must be work-related

4. The employee must meet reporting deadlines

5. The injured worker must attend medical appointments, examinations and treatments 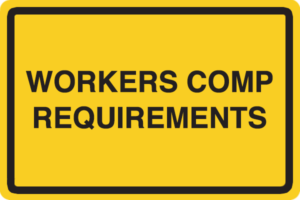 The concept  sounds simple enough, but the law has plenty of gray areas and the reading of those workers comp eligibility requirements varies, sometimes radically, from state to state.

For instance, in September, California Gov. Gavin Newsom signed a new law, AB 5, that elevated more than one million independent contractors to the status of “employees.”

These so-called gig workers — 525,000 of them being Uber and Lyft drivers — suddenly became eligible for, among other perks, workers compensation. While the Golden State awaits legal challenges, it’s safe to assume similar bills could be introduced in places like New York, New Jersey and Massachusetts, but would be nonstarters in other big, right-to-work states such as Florida and Texas.

Moreover, similar injuries can yield vastly, sometimes cruelly, different results, even when they occur in neighboring states. In 2015, NPR detailed the astonishing differences in benefits for two workers who suffered the loss of their left arms in industrial accidents. In Alabama, the disabled worker was paid $45,000 via workers compensation; 75 miles away in Georgia, his counterpart’s lifetime payout could exceed $740,000.

Translated: It’s a good idea to know where you stand before you need to file a workers compensation claim, even if your job has few injury risk factors.

Don’t wait until your human resources rep hints you might not be covered. The time to study up on workers compensation is now.

Find out if you are eligible for workers compensation today

A free consultation with an attorney will tell you the workers compensation benefits you qualify for, and how to claim them.

1. Injured Worker Must Be Classified as an Employee

Generally, only bona fide employees may file claims against an employers’ workers compensation insurance. As the evolving California example suggests, what constitutes an employee can vary from state to state. One state’s employee is another state’s independent contractor.

Even then, the law can be murky. If you’re working for a sub-contractor and suffer an injury on the job site, who’s responsible for workers comp benefits? The company that owns the project? The general contractor? The sub? Home rehabbers counsel newbies about making certain their contracts are ironclad. Many’s the rehabber ruined by a worker who climbed the ladder of an independent contractor, only to become an employee as soon as he tumbled off the roof.

Employees, who are covered by workers compensation, can be full time or part time. If you are expected to work certain hours in a certain location provided by the company, you’re most likely considered an employee, even if you’re not eligible for other benefits.

Contractors, by contrast, most often work hours they set themselves, and are not necessarily expected to appear in an employer-specified workplace setting.

Examples of contractors (in most states) include all manner of freelancers, workers who set their own hours (such as Uber, Lyft, and even taxi drivers), certain agricultural workers, part-time domestics (maids and nannies), gardeners, and home maintenance workers.

Also exempt (but they know this already): business owners, sole proprietors, and partners. Also, most volunteers working for nonprofits. However, volunteer firefighters and police officers are covered.

Federal employees, railroad employees, and longshoremen are not covered by traditional state-run workers compensation insurance; instead, their benefits are paid through plans authorized by Congress.

2. Employer Must Be Insured

Rule No. 1 then is: Make certain your employer is covered by workers compensation insurance. Consult the U.S. Department of Labor’s website to learn about the agency overseeing workers comp in your state. You also can discover your employer’s liability limits for assorted work-related injuries and illnesses.

If your employer doesn’t have workers compensation insurance (which will alert you to other possible problems with management), recovering financially from your work-related malady likely will involve a workers comp lawsuit.

But wait: Even if your employer is insured, be careful about signing off on the offered compensation. Once you agree to accept a settlement, you sacrifice your right to sue if your paid-out benefits prove insufficient. And as our amputee example above indicates, insufficient benefits are a distinct possibility.

In either scenario — insured or not — it is a good idea to consult a workers comp attorney about your options. Many will do so without charge, or for a small fee.

3. Injury Must Be Work-Related

As the title suggests, an injury or illness must be work-related to qualify for workers compensation benefits. Accidents on the job — when not the result of the employees’ misconduct — are covered. But so are repetitive-motion injuries in which some part of the body breaks down from the cumulative effects of everything from typing on a keyboard to lifting heavy objects (such as stocking shelves).

Workers compensation also covers illnesses that result from work or working conditions. Exposure to asbestos can result in mesothelioma; exposure to other hazardous materials can trigger allergic reactions or asthma. Workplace noise can result in hearing loss.

More recently, courts have established that injuries linked to emotional or mental stress come under the workers compensation insurance umbrella. Proving an injury or other work-related condition was caused by stress isn’t easy. And, again, states have different concepts about what qualifies as stress.

If you are injured during your commute, however, or when you leave the workplace for lunch, you may not be entitled to workers compensation benefits.

Each state requires an employee (or his/her representative, often a family member) to file a claim for workers compensation benefits within a specified amount of time; the amount of time available varies from state to state, and often from condition to condition.

One deadline involves making your employer aware of your malady. Many states want it done “as soon as possible,” while others have a specific deadline. That could be as short as three days (Wyoming, South Dakota) and up to two years (New Hampshire), but most give you somewhere around 30 days. Again, do it in writing, specifying the date and location of your accident or injury (or when you first noticed the illness or ache).

The other deadline involves when you must file your claim. In most states, you’re OK if you file within 12 months of your accident/injury/onset of your illness. There are 22 states that give you two years and Minnesota says you can have six years.

At every turn, be proactive. Take notes, keep receipts, photograph the area that was the source of your injury or illness, and — with all due professionalism — do your best to stay ahead of the process. If that sounds too daunting, consider enlisting a knowledgeable friend or family member, or retaining a lawyer trained in workers compensation.

Know this from the outset: Employers and insurance companies that manage workers compensation claims are on the lookout for fakers, malingerers, and outright fraudsters.

Some employees simply know how to work the system for maximum benefit. The insurance industry has a name for these folks: “career claimants.”

Among the red flags: Regularly rescheduling appointments with medical professionals — doctors, therapists, counselors — or diagnostic procedures, such as X-rays or MRIs.

Insurance carriers are not beyond dispatching observers to check on a worker on light duty who skips his visit to physical therapy to see if he might be active in ways that suggest he’s not in the pain he claims, say golf, tennis, or yard work.

“In this situation,” says Sarah Barkley Raaymakers, manager of the Carlson, Meissner, Hart, and Hayslett office in New Port Richey, Fla., “there could be potentially some understanding of a legitimate excuse for being unable to treat,” but you’re introducing uncertainty.

“It would certainly depend on the situation,” Raaymakers says, “along with the employer/carrier, and the judge.”

Keep in mind, the attorney adds, while workers compensation does offer the prospect of lump-sum payouts, there are no provisions for pain and suffering, your injury’s impact on your life, “or, frankly, most of the things that matter to many injured workers.”

Only two variables are considered when evaluating a case for settlement: medical costs and lost wages.

“If the injured worker is not going to the doctor,” Raaymakers says, “then that is going to diminish the overall value of the claim for purposes of settlement because it reduces the medical cost exposure for the employer/carrier.”

In short, even with legitimate excuses, missing even a small handful of appointments puts your benefits at risk. Once you’ve qualified for workers compensation payouts, cooperating with medical professionals becomes part of your job.

We’ve seen what a tricky road you have to navigate to start the flow of workers comp benefits. If you want to keep them coming until you’re healthy enough to return to work full-time, you won’t just accept that responsibility. You will embrace it.