What Happens If You Quit Your Job While on Workers Comp 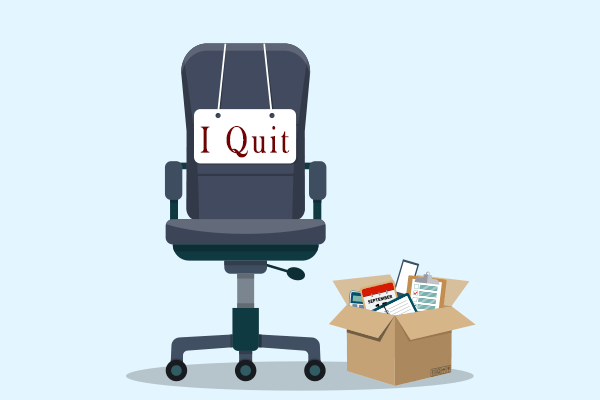 There are about 150 million people employed in America. A lot of them have at one point wanted to sing Johnny Paycheck’s No. 1 hit – “Take this job and shove it, I ain’t working here no more.”

But can you safely sing that tune if you’re on workers comp?

You may really want to quit your job if you’ve been injured while performing it, but will you lose your workers comp benefits if you tell your boss, “I’m walking out the door!”?

We wish you could give you a simple, cut-and-dried answer, but there are a lot of variables in play, like where you are in your recovery; what benefits you are eligible for; which state you live in; and what your reasons are for wanting to quit.

It could be post-traumatic stress syndrome, or PTSD. If you broke your back at a construction site, it’s understandable why you might not want to put a hardhat back on and climb back up a ladder.

Your employer’s insurance company may not be very understanding, however, and refuse to pay your claim.

That’s why the safest advice is to consult a lawyer before walking out the door, because you are entering a bureaucratic alphabet soup of PTSD, TTDs, PPDs and TPDs.

But if you want free guidance on the variables and how they could apply to you, read on.

Don’t sweat it. If you were hurt on the job, your medical bills will still be paid. It’s not as if walking away (assuming you can walk) suddenly heals you.

Whether you stay or go, workers comp gives you coverage for all medical expenses until the treating doctor says you have reached maximum medical improvement. Those expenses include hospitalization, rehabilitation, medication, surgery, assistive devices such as wheelchairs and even mileage to the doctor’s office.

Most work injuries are covered by insurance, including illnesses caused by exposure to unsafe working conditions. That spectrum increasingly includes mental illness.

It’s not unusual for a worker injured in a severe accident to recover from physical injuries and still suffer PTSD for many years. Sometimes workers get PTSD from merely witnessing a horrific injury. Think of what first responders to the scene of a mass shooting see.

States have slowly grasped this problem and are beginning to include it in workers comp claims. As of October 2019, nine states had passed workers compensation laws that generally cover mental health issues like PTSD, and at least 26 states were considering such legislation.

Medical coverage continues until your doctor says you’ve reached “maximum medical improvement.” That means you’ve fully recovered from your injury or further treatment would not improve your condition.

At that point, your condition will be assessed by the degree you are impaired. That will determine what kind of extended benefits you will receive.

That’s also where quitting has consequences.

Workers are entitled to be compensated for wages they are unable to earn while off work. Injured employees are put into one of four categories:

The key word here is “workers.”

Rules vary from state to state, but the common purpose of lost wage benefits is to bridge the financial gap until you return to work. If you have no intention of returning, there is no gap to bridge.

So when you quit, your lost wages will in all likelihood walk out the door with you.

If you’re not permanently totally disabled, a doctor may eventually give you the OK to return to work fulltime or on a limited basis. That means you’d work fewer hours and/or do less demanding tasks.

It’s your employer’s responsibility to accommodate you with lighter-duty work. If it does and you quit, you will lose your benefits.

“Your employer will say, ‘Hey, we had work for you within the restrictions imposed by the doctor. You’re voluntarily limiting your income. Therefore, we’re not paying you,'” Adler said.

It doesn’t matter if you’re classified as TPD or PPD. But if you’re TTD, you could still receive lost-wage benefits if your employer does not have light duty available.

Even if your employer makes the required accommodations, you could quit and still receive benefits if you can prove the lighter-duty work is beyond your physical capability, triggers PTSD, or your employer harasses you because you can’t do heavier work.

You never know how quitting will affect a workers comp settlement, but it’s hard to envision a scenario where it helps a worker’s cause.

If you’re on the payroll, it’s in your employer’s best interest to get you back at work as soon as possible. If you’ve quit, your employer might drag its feet approving medical care and other benefits.

One thing you don’t want to do is quit before even filing a claim. Your claim may be valid, but filing it after you quit makes employers and their insurance companies very suspicious. They’ll likely see it as a worker’s attempt to keep collecting a paycheck, since voluntarily leaving a job usually means they won’t be eligible for unemployment.

It’s advisable to wait until you have reached maximum medical improvement before quitting. Your medical benefits are probably safe either way, but waiting will allow you or your lawyer to better calculate your total losses and determine what constitutes a fair settlement.

Ideally, you’d also wait until your claim is settled to quit. If you dispute the claim, being on the payroll works to your advantage.

Employers often fear that an employee will re-aggravate his or her injury when they return to work. If you’ve already quit, you’ve taken that bargaining chip off the table.
So the bottom line is if you’ve been hurt on the job, this is Johnny Paycheck’s America. You have the right to walk out the door.

But if you want to get all the workers comp benefits that might be available, let the process play out before telling your boss to shove it.

Bill Fay has touched a lot of bases in his 45-year career. He started as a sports writer, gaining national attention for work on college and professional sports. He had regular roles as an analyst on radio and television and later became a speech writer for a government agency. His most recent work is as an internet content marketing specialist. Bill can be reached at [email protected].